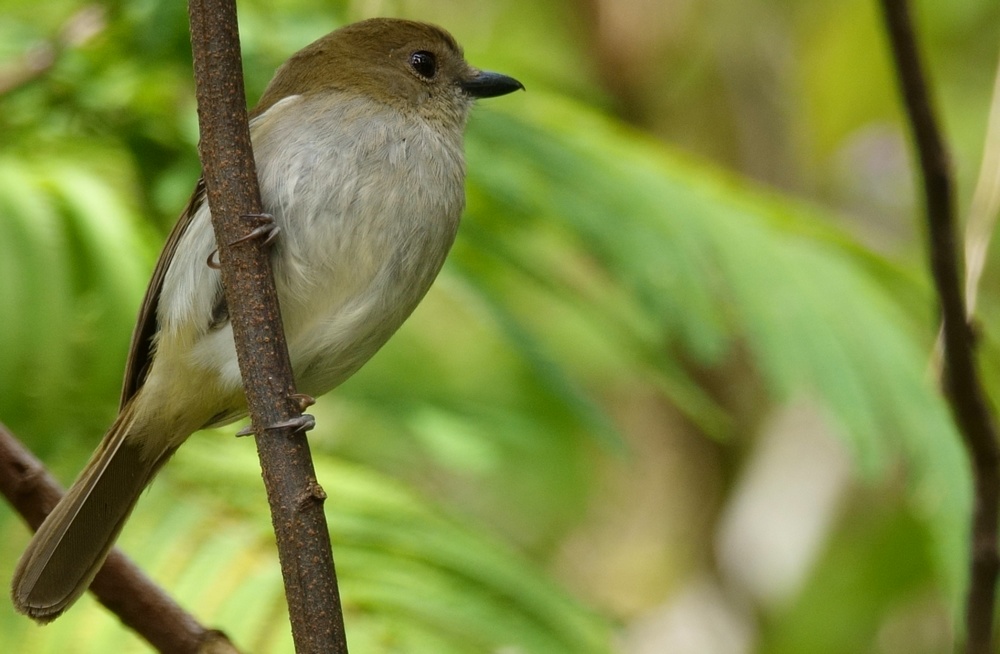 This smallish passerine is endemic to Northern Philippines, were is mainly occur in Luzon (a small population exist also on Mindoro). It is locally common but occurs only in forest (up to 2000 meters asl), which means that the global population decrease, as deforestation is far to be eradicated in the area. It is still considered safe, though, as forests above 1000 meters asl are his favourite, and they are less under pressure that lowland ones.

Virtually nothing is known about its behaviour and ecology. It is insectivorous and it joins mixed bird flocks. No information about breeding has been published yet !

Beginners and other birdwatchers discovering Philippines birds might have trouble to identify Green-backed Whisler. Actually they might even fail to notice the species among the numerous song birds that form a usual forest flock (or bird party). Indeed, that bird is dull, can perch motionless on a low branch as a flycatcher while its thicker bill and body recall a small bulbul. Despite its name, and in a main difference to the more widespread Mangrove Whistler, its song is not loud and can be easily overlooked.

This is where a local bird guide can really help. At first sight, or even before with the calls, he might identify the Green-backed Whislter, show it to you, and point the details that can lead to a positive identification. Shape of the body, length of tail and thickness of the bill are best used, as colours are dull and the bird would appear simply “grey-brown” overall (paler below – see the photo on the right).

While in Bangkong Kahoy, ask for Cris (contact through their Facebook page). He will easily locate Green-backed Whislter during your first hundred meters in the forest of Mount Banahaw where the local subspecies is common (see photo below).

Although not spectacular, this species is endemic to Luzon and Mindoro, and all serious naturalists traveling in the area will want to see one. It is not rare, just very localised. On Mount Banahaw, it is even common albeit secretive, dull and often wrongly drawn in field guides.

While formerly considered as a subspecies of Mangrove Whislter, together with Whitevented Whistler, it is effectively very different in all habitats, calls, songs, plumage, shape and behaviour. Earlier scientists that lumped those species in one have probably never seen any in the field, as we explained for the Chestnut-faced Babbler here. Collected specimens are rarely reliable to understand how the bird really is, even less to know anything about its behaviour and voice.

Three subspecies are described and vary for slight plumage details ; two example are shown on the photos below.

[Species #797 of the Holistic Encyclopedia of Birds project]

SEE HERE OTHER PAGES ABOUT BIRDS TAKEN AT BANGKONG KAHOY :

List of other species pages: taxonomical – day per day

All photos and text are © Valéry Schollaert 2020