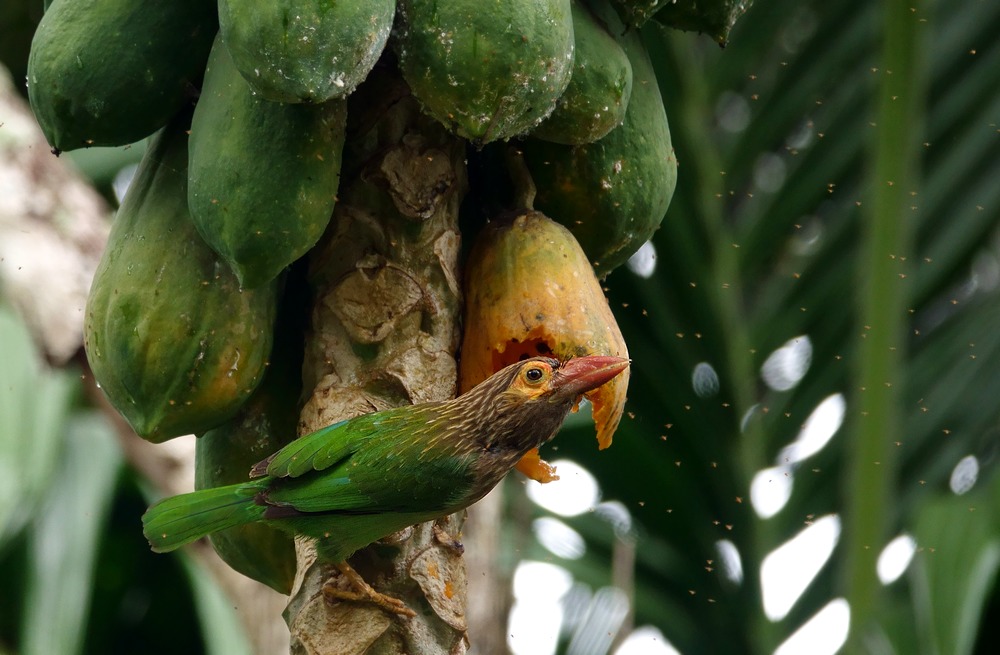 This large barbet is widespread in India and Sri Lanka with a small population in south-western Nepal. It was discovered in Pakistan in 2016. He’s pretty easy to see for an Asian barbet, and very noisy. It has a rather characteristic behaviour of the family, thus being an excellent reference for the family. This species is doing well, adapting to agricultural environments, villages and even some cities like New Delhi.

Illustration of the Bird-in-tuition method

The behaviour of this barbet is classic for a Megalaimidae, even reminiscent of that of African barbicans (Lybiidae). It is a frugivorous bird, which therefore consumes fruits (especially figs, papayas, tomatoes and many others), berries including coffee beans but also, to a lesser extent, invertebrates and small lizards. The couple digs a cavity in a trunk where the female lays 2 to 4 eggs. The couple incubates and feeds the young, but apparently it is only the female that spends the night on the eggs.  It is a sedentary bird that can, however, forms groups in fruiting trees, often with other species. It is forest bird but well adapted to degraded and anthropized environments.

The couples sing in duet, and often respond to the songs of neighbouring couples; when they gather in a fruiting tree, they can sometimes give a true concerto for barbets…

It is very close to the Lineated Barbet (Psiloposon linaetus) but does not hybridize in sympatric areas of Nepal and northern India. There are three or four subspecies recognized, northern birds being a little lighter on the head and neck than southern ones, and there is a slight north-south cline (northern birds are a little larger).

[Species #182 of the Holistic Encyclopedia of Birds project]

List of other species pages: taxonomical – day per day

All photos and text are © Valéry Schollaert